Once Upon a Time in Mumbaai

Irshad Kamil is a songster of class. Every time he writes, he tries to break the boundaries of generation gap and compels one to think beyond words.  He has command on all genres and his wordplay easily travels the terrains of life, philosophy, romance, patriotism, sensuousness and Sufism. It’s the color of simple words and deep thoughts that paints his writings.  Apart from winning three Filmfares, he has been awarded with the likes of Screen, IIFA, Zee Cine, Apsara, GIMA, Mirchi Music, Big Entertainment and Global Indian Film and Television Award. Having written lyrics for films like Tamasha, Rockstar, Raanjhana &  Sultan etc. he is an engrossing litterateur, who continues to write extensively for literary magazines and newspapers of repute. His criti-analytical book ‘Samkaleen Hindi Kavita: Samay Aur Samaj’ is already well received in the academic circles and a full length play ‘Bolti Deewarein’ is making waves in the theatre arena. His latest offering 'Ek Maheena Nazmon Ka' was his first anthology of 'Roamantic Feelosophy'. 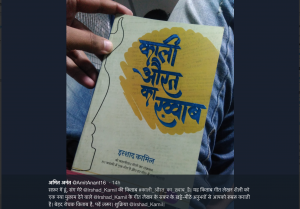